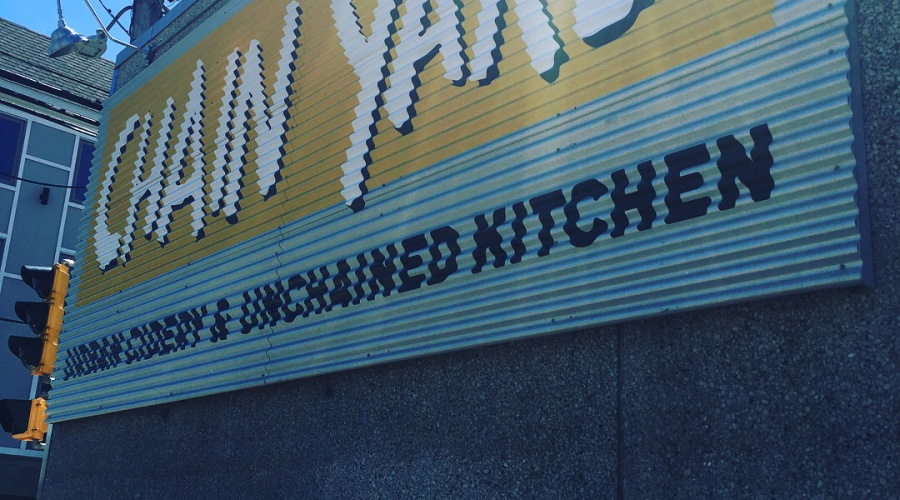 While in Halifax for a work conference in April, Bethany of the Cider Crate decided to visit Chain Yard – an urban cidery located a few minutes from the downtown core of Halifax. Having tried one of Chain Yard’s ciders last June thanks to a visiting friend from the Maritimes, we were already familiar with the type of cider they made but wanted to learn more about the cidery and their other products. Susan – manager of Marketing – gave Bethany a wonderful tour of their facilities. Explaining that they only opened May of 2017, they were relatively new and only one of two cideries with hospitality features – as most other cideries in Nova Scotia are producers only. Having one of the most experienced cider makers in the province helping to create their drinks, they have been able to make 3 core canned ciders; as well as a variety of limited run unique ciders available through draught only.  At the time of visiting, they had a special cider feature called Ginxberry – a cider made with 3 types of apples, wildly fermented cranberry juice and Barreling Tides Gin.

Susan explained that ‘Nova Scotians have a sweeter palate and they gravitate towards smoother, less hoppy beers and ciders’ so they have ciders that appeal to that general taste. However, they also aim to expand people’s horizons and push them towards new tasting experiences, so they blend traditional beloved flavours and new experimental ones in hopes to gain and keep fans interested. Currently using 100% Nova Scotian apples, they have 3 farm sources from the famous Annapolis Valley where they are abundant.

They also feature the ‘Unchained Kitchen’, which operates independently within the cidery but features foods that pair well with cider; and many are even made using the cider and apples.

You can buy their ciders on site and from their bar, at the Nova Scotian Liquor Store and other licensed stores – including the in Halifax Airport arriving or deporting! As well as on draught at many locations across the city and province and Maritimes.

If you are a Nova Scotia native or are just visiting Halifax like us, Chain Yard Urban Cidery is not to be missed by any cider fan!

What we are talking about!

Subscribe to receive special updates about our site in the near future!